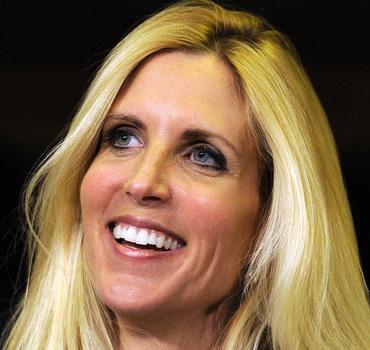 Ann Coulter is a prominent American social and political commentator, columnist, writer, and a lawyer who is currently seen on television, writs columns, is heard on radio, and also speaks at public and private events. She is a polemic person and doesn’t believe in being neutral and impartial in her statements. Ann Hart Coulter was born on 8th December 1961 in New York City to father, John Vincent Coulter who was an FBI agent and to mother, Nell Husbands Coulter who was a native of Paducah in Kentucky. Ann Coulter bio highlights that she grew up in New Canaan, Connecticut, with her two older brothers named James and John. Coulter went on to attend New Canaan High School and graduated in 1980. Ann then went on to join Cornell University where she helped found The Cornell Review. She was also a member of the Delta Gamma national sorority. Coulter graduated cum laude in 1984 with a B.A. in history from Cornell. She later received her JD from the University of Michigan Law School in 1988. While in Michigan, she was an editor of the Michigan Law Review and also a president of the local chapter of the Federalist Society. Coulter later took training at the National Journalism Center. Among other things, she gained popularity for her book titled In Trump We Trust. Also, she was invited to participate in a roast of Rob Lowe on Comedy Central in September 2016. However, the event turned out to become an Ann Coulter Roast instead.

In order to pursue a successful career in journalism, Ann Coulter first served Pasco Bowman II of the United States Court of Appeals for the Eighth Circuit as a law clerk, in Kansas City. Later she Later she began working for United States Senate Judiciary Committee in 1994. Ann came into the limelight after she wrote the weekly syndicated newspaper column and published a number of books. She started making comments on abortion, Afghanistan war and same-sex marriage to soccer to the presidential election. Ann emerged into the glare of publicity in 1990s when she began commenting on the Clinton administration. She wrote her first book concerning Bill Clinton accusation, and also her experience of writing legal briefs for Paula Jones's attorneys. Coulter has since been the author of ten books. Many of her books have emerged on the New York Times Best Seller list. She is thus a successful author as well. She is very successful in her field of work; Ann Coulter net worth amounts to a staggering $8.5 million.

Ann Coulter is a broadcaster who does not shy away from giving out her opinions. She is head strong, and does not pretend to be balanced or impartial like most people in her field of work. She has great political knowledge and likes sharing her knowledge even if it sometimes causes controversy. Coulter has made bold claims like saying that taking away women’s right to vote might actually be politically beneficiary. In one incident, The University of California Berkeley canceled Ann Coulter speech due to security threats. There had been several acts of violence by white supremacists in the Campus in the past and the University did not want it to happen again. For Ann Coulter Berkeley incident was an infringement of her right to speech. However, the security threats could not be overlooked.

Ann Coulter has never had the change of having a husband because her dating history speaks mostly of broken engagements. Ann is noted to have three boyfriends till date but is currently single. She first dated Bob Guccione who is the Spin founder and publisher. Later she was seen in public with boyfriend Dinesh D’Souza, a conservative writer. Most recently she dated Andrew Stein who is the former president of the New York City Council. Andrew announced later that the couple had split up because of irreconcilable differences. Ann is not married till date and does not have any children. Ann Coulter age is currently 55 years old but she still has a well maintained figure with measurements of 36-24-33 inches. Ann has also been complimented for looking hot in a bikini. She stands tall at the height of 1.83 meter.