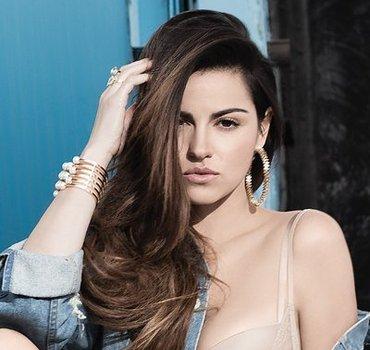 Mexican actress and singer/songwriter Maite Perroni A.K.A Maite Perroni Beorlegui was born on 9th March 1983 who is best known for starring in Rebelde (2004), Cuidado con el Ángel (2008), Mi Pecado (2009) with Triunfo del Amor (2010) and Cachito de Cielo (2012). She grabbed international attention as a member of the Latin Grammy nominated pop group RBD. According to Maite Perroni bio, she was born in Mexico City. She grew up in Guadalajara. When she was 13 years old, her family relocated again in Mexico City. She has two siblings Adolfo and Francisco who are three and nine years younger than she is.

In 2017, it has been estimated that Maite Perroni net worth has been estimated somewhere around 8 million dollars. She landed her acting debut in Rebelde, a remake of the much-praised Argentinean novel Rebelde Way. She has portrayed the character of Guadalupe "Lupita" Fernández, a teenage girl from a lower class family who gets the opportunity to study at the fictitious Elite Way School. Rebelde ran for 440 episodes from 2004 to 2006. After the success of Rebelde, in 2007, Televisa released RBD: La Familia, which starred the members of RBD. Actually, the characters of the sitcom were not based on the band's characters in Rebelde, but there was some similarity between the actors and the real personalities. RBD: La Familia was the first Mexican show filmed entirely with high definition resolution and ran from 14th March 2007 to 13th June 2007 and only lasted 13 episodes. Throughout the years, Maite has made a special appearance in two episodes of telenovela Lola...Erase Una Vez and in the sitcom Skimo with other members of RBD. In 2008, Maite was casted as the first lead character in Cuidado con el Ángel, opposite William Levy. The show became a worldwide success. In 2009 she appeared in Mi Pecado opposite Eugenio Siller. In 2010 she starred in with her previous co-star, William Levy, in Triunfo del Amor, a remake of the Venezuelan classic Cristal. During the filming of it was rumored that Maite Perroni and William Levy were dating. Similarly, in 2012 she starred in Cachito de Cielo alongside Pedro Fernandez.  She is involved with RBD and RBD has launched many studio albums, including albums in Spanish, Portuguese and English.

In the past, many names have been highlighted as Maite Perroni boyfriends such as Mane De La Parra and Eugenio Siller. It was reported that Maite Perroni and her boyfriend Koko Stambuk, seeking diamond ring which might be for their most awaited engagement. Along with this, it was speculated that Maite Perroni married secretly.  In fact, she hasn’t commented yet regarding the speculation.

Gossips don’t end here as the news about Maite Perroni pregnant also became the talk of the town. However, the speculation may be false but one thing is sure that there is no smoke without fire. No name has been highlighted yet as Maite Perroni husband.