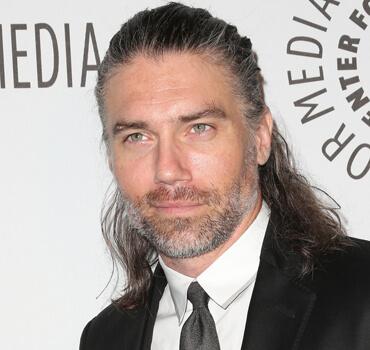 Anson Mount is a prominent American actor who is mostly recognized for his character Cullen Bohannon in the AMC’s Hell on Wheels. He has also acted in many movies including Crossroads, he Two Mr. Kissels and Privacy Policy to name a few. Furthermore, most recently he was cast in Marvel’s Inhumans as Black Bolt which is a perfect pick because Black Bolt is the King of the Inhumans and Mount is suited for that role due to his strong regal looks. Following is the Anson Mount bio. Anson Adams Mount IV was born on 25th February 1973 in Mount Prospect, Illinois to mother, Nancy Smith who is a former professional golfer, and to father, Anson Adams Mount II who was one of the inventive contributing editors to Playboy magazine. Mount spent most of his childhood days in White Bluff, Tennessee with his older brother, Anson Adams III, and his sister, Kristin, from his father's first marriage. Anson went on to attend Dickson County High School based in Dickson, Tennessee. After graduation Anson decided to join the University of the South and Columbia. While studying there, Anson was a very active student. He used to take part in many activities and was also a member of Lambda Chi Alpha fraternity. Anson was very enthusiastic about acting from a small age so he decided to pursue an acting career.

Anson Mount movies and net worth

Anson went on to make his debut in 2000 as character Toby Belcher in movie, Urban Legends: Final Cut. His acting skills were very much appreciated and thus it also landed him many roles. Some of Anson Mount movies include Boiler Room, Poolhall Junkies, In Her Shoes, Cook County, Last Night, Non-Stop, Supremacy, and Mr. Right. In 2002, Anson came into the limelight after he played the character Ben Kimble in the movie, Crossroads. For his co-acting with Britney Spears, they shared a nomination for Golden Raspberry Award for Worst Screen Combo and surprisingly for Teen Choice Award for Best Chemistry. Later in 2008, Anson marked his role as Robert Kissel in the TV movie The Two Mr. Kissels. Mount has not only acted in movies but also has landed small roles in television series. In 1999 he acted in an episode of Sex and the City as character Gregory. Anson Mount age was just 27 years when he did that role. He was also seen in an episode of the popular sci-fi series, LOST in 2005 as character Kevin. Anson appeared as Evan Walraven in 3 episodes of Red Widow. He is also noted for playing Jim Steele on Conviction which was a brief NBC series. At present Anson has graced AMC’s hit show Hell on Wheels as character Cullen Bohannon. At this moment, Anson Mount net worth is estimated somewhere around 3 million US dollars.

Not much is known about Anson’s personal life because he is reluctant on speaking about it in public. However, there have been rumors that Anson is not married but has a girlfriend named Famke Janssen. Famke is a Dutch actress, director, and screenwriter and was also a model. Anson has never revealed much about his girlfriend. Only time will tell if Famke Janssen will be Anson Mount wife. Recently, there have been rumors about Anson being gay because he does not speak much about his sexuality and is not seen with many women in public. Currently, he is 44 years old.

Anson gives high priority to privacy so you cannot know much about his personal life. However, people can find him on social media sites such as Facebook, Twitter, and Instagram where he shares some moments of his life with his fans. Anson Mount height is 6 feet 1 inches and we all hope that his career also further grows as much as his height with his newest role in the most awaited Marvel movie Inhuman.